the ministry journal of Linus and Sharon Morris

Sharon and I were recently privileged to be a part of two birthday parties. The first was in France (greater Geneva, Switzerland area), where we celebrated the first birthday of a new church called the Crossroads St Genis (one of the growing communities just across the French/Swiss border near Geneva). It was birthed out of the Crossroads Ferney-Voltaire (just inside France right next door to the Geneva International airport) where Sharon, our six children, and I lived for four years, teaming with two other couples to launch that church.

It was exciting for Sharon and me to return and see all that God is doing through the Crossroads Ferney, and its now one-year old offspring, Crossroads St. Genis. Literally, thousands of people’s lives have been and are being impacted for Christ. We are believing along with their leadership that in the years ahead thousands and thousands more will come into or deepen their relationship to Christ, and become part of His mission to the world.

From Geneva, Sharon and I made the trek north to Amsterdam where we celebrated the 25th anniversary of the church we helped launch during our five years in Holland. We met with the Crossroads Amsterdam elders on Friday evening, and I was interviewed, and then preached, during the two Sunday services.  What a dynamic time it was.

The biggest plus to us is that the DNA we sought to embed in Amsterdam lives on with gusto. Our vision was to plant a high-impact church that was Christ-centered, Biblically-based, Grace-oriented, Outreach-focused, Spiritually-vibrant, Culturally-relevant, and Passionately-missional. All that is taking place.

We were impressed with the Crossroad’s Northern-Ireland pastor, James Paton pictured above, and the church’s staff, and elders. We felt honored to be there and to be given a place in the service. Most of all, we thanked God for the impact for Jesus that the Crossroads is having throughout Amsterdam and the Netherlands. The church is made up of people from 70 nations…with lots of young Dutch too.

The Crossroads Worship team did an incredible contemporary version of a medley of songs from the ‘80s,’ ‘9os’, and first decade of 2000. It was impressive and uplifting. Listen to the message   Watch the worship

Following the services, part of the celebration included eating food that Crossroads members prepared in advance. 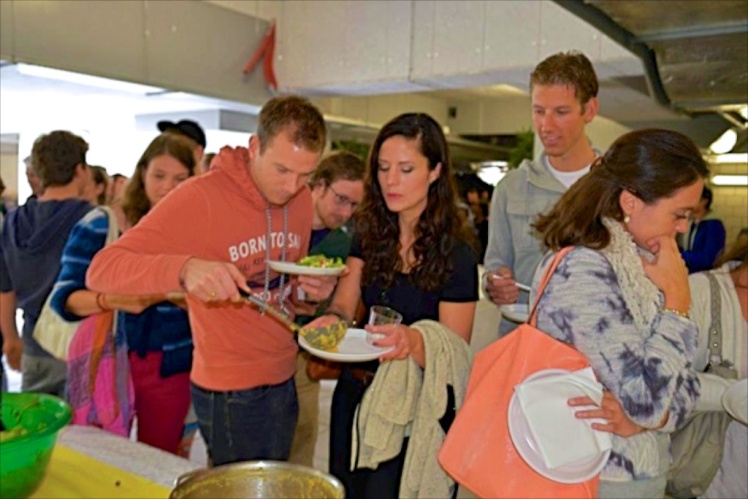 It was a great joy to connect with friends who are part of the Crossroads, and to get feedback from those whose lives have been impacted by the church during and after our time there. Here are just a few comments that encouraged us:

“It was an amazing seven years…wish I could have been there at the celebration. It was a wonderful opportunity to serve and build with some amazing people. Linus the day you went to Regent to recruit for missionaries – my life took such and unexpected turn. To God be all the glory – and Crossroads – the best is yet to come.”

Gerald wrote regarding the Crossroads Amsterdam:

“It’s great to see the impact that these folks have had on communities in Europe, especially since I have been a recipient of their labor and gotten to see first hand the thriving fellowship that was first begun on their behalf”

Jack and Claire in Geneva:

“We enjoyed having you both here and catching up on the fire that is still within you both.”

There are so many people who played, are playing, and will play significant roles in what the Crossroads churches (and other churches we helped start) have and will become. It would take a lot of space to name them but Sharon and I count it a great blessing to have been two of those people (our six children too). We were happy to celebrate what God has done, what He is doing, and by His grace, He will continue to do as we press forward to “multiply viral, missional, church-planting movements.”

So grateful for the role you play…

One thought on “Two birthday celebrations in Europe”